The Hell Rooms of Calvert County, Part I - Seclusion & Restraint 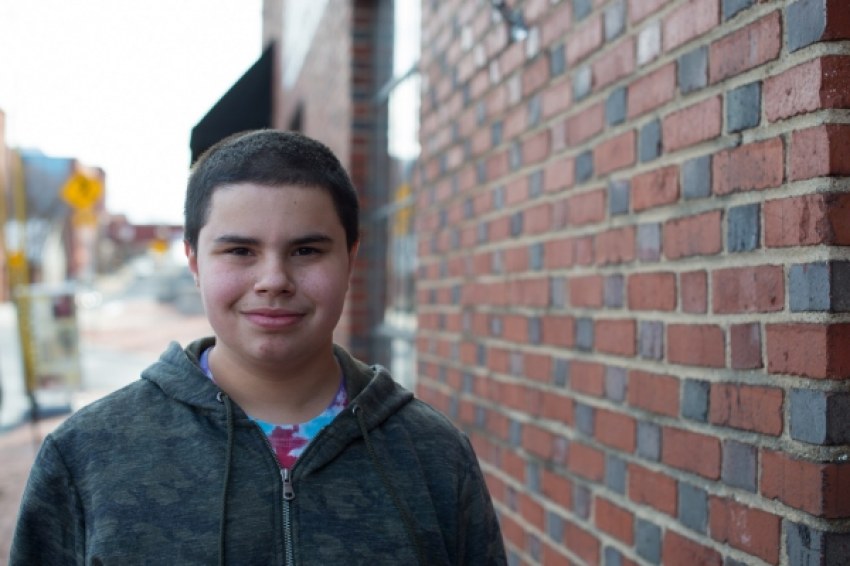 “Seclusion and restraint.” It probably isn’t a term with which most people are familiar. If the unfamiliar person were to wager a guess at just what exactly does “seclusion and restraint” mean, images of maximum security prisons or the interrogation of terrorism suspects might come to mind. Cooper Stephens is all too familiar with the term; yet, he isn’t an inmate or a terrorism suspect. Cooper is an unassuming 13-year-old special education student in the Calvert County Public School System. In two words, Cooper describes the seclusion room where he was held: “It’s hell.”
Media attention has recently focused on the issue of seclusion and restraint in Fairfax County, VA schools. According to a report on WAMU-FM, the school system failed to report hundreds of cases of seclusion and restraint to the federal government, and special needs children were traumatized by repeated acts of seclusions at the hands of school personnel.
Calvert County, MD, nestled on the western shore of the Chesapeake Bay, may not have a lot in common with Fairfax County, VA. But, when it comes to the school’s practice of seclusion and restrain on students with disabilities, things begin to look a lot alike.
The Code of Maryland Administrative Regulations (COMAR) defines restraint as “a personal restriction that immobilizes or reduces the ability of a student to move the student’s torso, arms, legs, or head freely.” Seclusion is “the involuntary confinement of a student alone in a room or area from which the student is physically prevented from leaving.” Together, these practices are known as “Student Behavior Interventions.”
Cooper and his father, Guy Stephens of Lusby, MD, allege that Cooper was subjected to both restraint and seclusion at Calvert County Middle School on a number of occasions during his first fourteen days of the 2018-2019 school year. The Stephens contend that the experience was so traumatic to Cooper, that after only three weeks of attendance at the school, he was unwilling to return. He is now receiving education through “Home & Hospital Instruction.”

Cooper was subjected to both restraint and seclusion at Calvert County Middle School on a number of occasions during his first fourteen days of the 2018-2019 school year.

Guy Stephens explained that Cooper had a positive experience in the Calvert County Public School system from first grade until the mid-year of fifth grade. Cooper, who started first grade in what is today called an “SLE” special education program, progressed remarkably well, particularly with the support of a favorite teacher with whom he was with for two and a half years. By the middle of fifth grade, Cooper was in regular “inclusion” classes for all but one subject. But, things took a turn for the worse when Cooper’s teacher was in an automobile accident and did not return to the classroom for the remainder of fifth grade. “Change is difficult for Cooper”, noted his father. “When he lost his primary support person at the school, there were a number of behavior issues.”
Mr. Stephens stated that things came to a head after Cooper experienced two incidents of being physically restrained by school personnel in fifth grade. On the last occasion, Cooper had left his classroom and was hiding in a school bathroom. While one school staff member coaxed Cooper out of the bathroom, another grabbed hold of him unexpectedly and physically forced him into a classroom. “This pushed Cooper from a 9 to a 20 on his scale of escalation.” Mr. Stephens was called to the school and found Cooper in the classroom, throwing items and ripping things up. Mr. Stephens asked the several school personnel present in the room to please step out. He spoke to Cooper and helped him to eventually calm down.
After much consideration and with Cooper’s input, The Stephens decided to homeschool Cooper for sixth and seventh grades. Near the end of seventh grade, Cooper began showing an interest in returning to public school. In contemplating Cooper’s return to Calvert County Schools, Mr. Stephens stated, “physical contact was a huge concern for us.”
Mr. Stephens notes that Cooper is on the autism spectrum, is diagnosed with Attention Deficit Hyperactivity Disorder, and an anxiety disorder. Mr. Stephens furnished copies of numerous correspondence he had with the staff of Calvert Middle School before the eighth grade school year had begun, demonstrating his efforts to inform Cooper’s teachers about his disabilities, develop an adequate Individualized Education Program (IEP), and convey ways for the teachers to best communicate with Cooper to prevent behavioral escalations.
In a September 12, 2018 email Mr. Stephens sent the school, he wrote, “Do not touch or try to restrain him if he is very upset, this can make a bad situation worse.” Mr. Stephens believed he had done everything needed to make Cooper’s experience returning to Calvert County Public School a positive and successful one. Unfortunately, it was anything but positive and successful, as Mr. Stephens and Cooper allege that Cooper was physically restrained on numerous occasions. The first occurrence was on the third day of school.
Mr. Stephens does not believe that Calvert County’s seclusion and restraint policies are in alignment with Maryland state law. Maryland law mandates that “the use of seclusion is prohibited in public agencies and nonpublic schools until there is an emergency situation and seclusion is necessary to protect a student or other person from imminent, serious, physical harm after other less intrusive, nonphysical interventions have failed or been determined inappropriate.”

Mr. Stephens does not believe that Calvert County’s seclusion and restraint policies are in alignment with Maryland state law.

Calvert County Public Schools has adopted “Administrative Procedures for Policy #3215 (Students) Regarding Student Behavior Interventions”, which is published on the school system’s website. This document, last revised on September 8th, 2017, establishes a lesser standard for the practice of seclusion on students in Calvert County public schools than the standard required under Maryland law.
Calvert County permits school personnel to practice seclusion when “there is an emergency situation in order to protect the student or another person after less intrusive interventions have failed or been determined to be inappropriate.” At first glance, this policy may look the same as what Maryland law requires; however, there is an important element missing from Calvert’s policy. COMAR dictates that seclusion can only be practiced to protect a student or other person from imminent, serious, physical harm [emphasis added]. Those four little words carry great meaning.
On January 14th, 2014, the Maryland State Department of Education – Division of Special Education / Early Intervention Services issued the “The Use of Restraint and Seclusion” Fact Sheet to help guide Maryland schools with policy development. This guidance document emphasizes the “imminent, serious, physical harm” standard for the practice of restraint or seclusion, and it further defines exactly what is required before a school can act to restrain or seclude a child; namely:
1. a substantial risk of death; 2. extreme physical pain; 3. protracted and obvious disfigurement; or 4. protracted loss or impairment of the function of a bodily member, organ, or mental faculty.
A review of policies from other Maryland county school systems, including Howard County and Anne Arundel County, reveal that their policies include the “imminent, serious, physical harm” standard as prescribed by Maryland law.
Mr. Stephens obtained copies of the documentation Calvert Middle School staff completed for two reported incidents of restraint and seclusion practiced on Cooper in September and October of 2018. The September report indicates that Cooper was placed in the seclusion room for hitting the school psychologist in the arm, hitting doors/walls and being verbally aggressive. In the October incident, the documentation indicates that Cooper was placed in the seclusion room for spitting, kicking, and hitting doors/walls. During the October incident, after Cooper was released, he was again placed in the seclusion room a short time later for throwing water on the staff.
Mr. Stephens has filed a complaint with the Calvert County Public School system. He does not believe that Cooper, even if he did spit, throw water and do the other reported behaviors, did anything that rises to the level of putting anyone at risk of imminent, serious, physical harm. Mr. Stephens’s complaint centers on Calvert County’s practice of seclusion and restraint in alleged violation of Maryland law, and he believes that the State of Maryland has published the statistics that support his position.
On December 1, 2018 the Maryland State Department of Education published a report titled “Restraint and Seclusion Data Collection, Findings, and Recommendations.” This report shows the number of restraint incidents and the number of seclusion incidents reported in each Maryland county during the 2017-2018 school year. Calvert County reported 701 incidents of seclusion and 576 incidents of restraint for the school year. Though only 14th in size in terms of total school enrollment, Calvert County was second in its percentage of both seclusion incidents and restraint incidents. Mr. Stephens believes Calvert County’s numbers are actually higher than reported, alleging that he believes Cooper was restrained and secluded six or seven times, though the school has only provided him with documentation of two incidents. “They’re doing it and they’re not reporting it”, Mr. Stephens alleges.

Though only 14th in size in terms of total school enrollment, Calvert County was second in its percentage of both seclusion incidents and restraint incidents.

Though burdened with his personal challenges, Cooper Stephens is nonetheless an astute child. Cooper has intently followed his father’s efforts to advocate for him and for other similarly situated students with disabilities. Cooper, while recently riding home with his father after attending a friend’s birthday party said, “I think I want to go back to school.” When Mr. Stephens talked with his son about this decision, Cooper added, “If I go, I want to take your cell phone. I want to record them. I want to show you what they did to me.”
“Seclusion and restraint.” It probably isn’t a term with which most people are familiar. Ms. Dawn Balinski, President of the Calvert County Board of Education, was contacted for a comment about this investigation. Her comment suggests that even she is not appropriately familiar. “Until last week, when a parent sent the [Maryland State Department of Education] report to me on ‘restraint and seclusion’ data by county, I had never even heard those words used in connection with our discipline procedures” Ms. Balinski wrote in an email to Waller Squared Media Productions.
According to guidance provided to schools by the U.S. Department of Education, “Restraint or seclusion should never be used as punishment or discipline…” (U.S. Department of Education, Restraint and Seclusion: Resource Document, Washington, D.C., 2012.)
Though Ms. Balinski wasn’t previously aware of the issue, she is now concerned. She wrote, “I was shocked to see the high number of incidences in Calvert and have asked the Superintendent to investigate and report back to the Board.”
———————————————————-Mr. Guy Stephens and Cooper have consented to being identified in this report.
An interview has been scheduled with Superintendent Daniel Curry. A request for records has been made to the Calvert County Public Schools pursuant to the provisions of the Maryland Public Information Act. Additional investigative reporting to follow.
About the author: Brian Waller is a retired police administrator, crisis intervention, Mental Health First Aid and law enforcement use-of-force instructor.  At one time a criminal investigator, he now applies those same skills and professional standards towards investigative reporting, presenting cases in the court of public opinion.
Brian does not conduct for-hire private investigations; rather, he follows tips and leads to conduct pro bono public investigation on  issues of significance to local communities.  He writes about his findings through the honed craft of advocacy journalism.  Brian does not get paid for conducting investigations or writing articles, – putting  the “free” in freelance reporting.  He co-manages Waller Squared Media Productions, LLC with Robert Waller, and may be reached at @
Brian Waller is a member of the U.S. Press Association as well as the Constitution First Amendment Press Association.
[Submitted by Brian Waller]