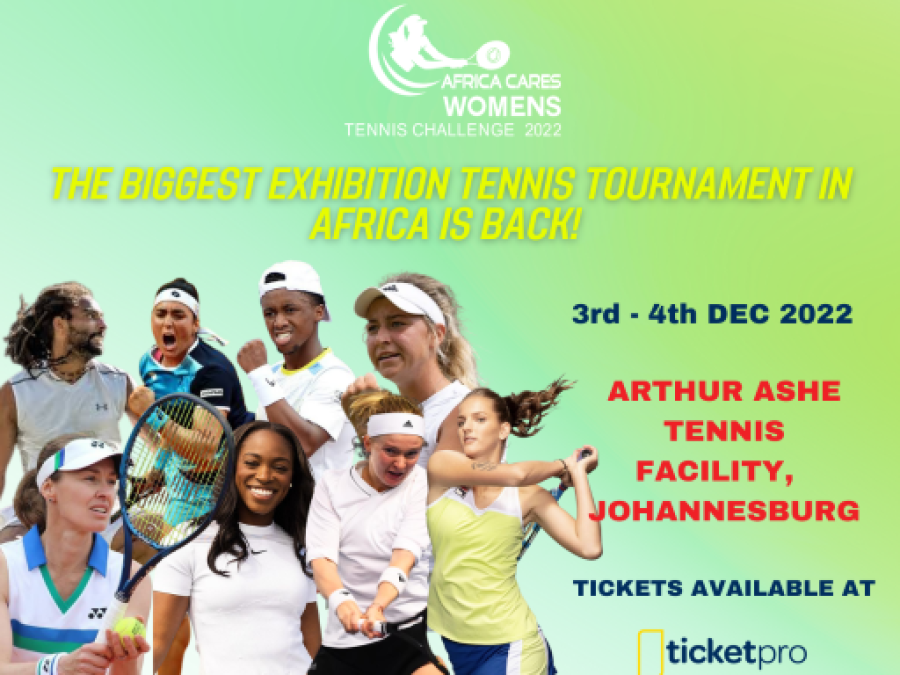 Johannesburg, 29 November 2022 – Africa Cares Tennis Challenge which was set to take place this coming weekend at the DP World Wanderers Stadium has announced that the event will now be moved to Arthur Ashe Tennis Centre, still in Johannesburg.

The organisers of the Africa Cares Tennis Challenge have announced that due to the unexpectedly low ticket sales, they have decided to move the event to a smaller venue, which is more in-line with what the event stands for; which is to develop and promote tennis in South Africa, to all communities.

There were also concerns around forecasted weather causing delays in the building of the court structure, should the event still have taken place in the stadium. The Arthur Ashe Tennis facility has existing tennis court structures and has hosted many international tennis events.

Arthur Ashe was an (and remains the only) African American professional tennis player who won three Grand Slam singles titles. Arthur was an author, teacher, and activist who fought for civil rights and racial equality, not only in the United States but worldwide, particularly against the apartheid systems of South Africa. He was also the first black tennis professional player to play in South Africa’s National Championship.

The Arthur Ashe Stadium was erected in 1974 by him and was recently refurbished which sees current programmes at the centre that focus on both tennis and academics, something that Africa Cares Tennis Challenge is passionate about and feels that it aligns with its values.

Africa Cares Tennis Challenge aims to use sports as a vehicle to promote an international awareness-raising campaign for No Violence against Women And Children. The event is set to bring international and local tennis players including World Number 2 tennis player Ons Jabeur, former Swiss tennis player Martina Hingis, German-Jamaican Dustin Brown, American Sloane Stephens who has already arrived in South Africa this past weekend, South African Tennis players Khololwam Montsi and Isabella Kruger, British tennis player Francesca Jones, and Karolina Pliskova who is from the Czech Republic.
South African award-winning television presenter, radio personality, actress and social media personality, Bonang Matheba is set to be the official host of the event on both days.