Fans in line to catch a million rand 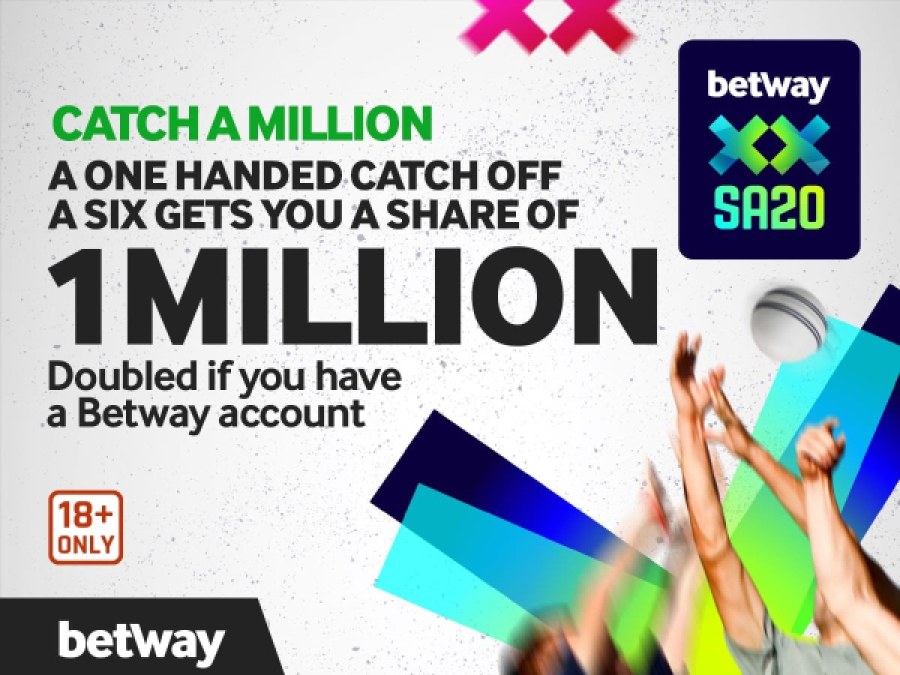 Tuesday, 10 January: Fans have an opportunity to become instant millionaires during the Betway SA20 with the ‘Betway Catch a Million’ competition rolling out at all 33 matches across the country. The stands will be the place to be with spectators above the age of 18 who take a clean one-handed catch off a six walking away with a share of one million rand.
With some of the most explosive batters and strike-rates in T20 cricket coming out to perform in the League, fans can be certain to have many opportunities to take a life-changing catch.
Betway Head of Marketing, Mark Rowles, said:“As part of our title sponsorship we wanted to bring something to the fans in the stadium and are excited to be able to launch the Betway Catch a Million.

"Fan engagement is at the forefront of our business, and we hope to see all spectators get involved in this exciting campaign and win their share of R1 000 000.00. As an incentive to Betway SA account holders, their share of winnings will be doubled into their accounts. We hope all the fans get behind the teams and we are looking forward to the inaugural Betway SA20.”

Newlands’ capacity crowd will be the first in line for a share of the million rand during the opening match between MI Cape Town and Paarl Royals on 10 January. Both teams boast some of the biggest hitters in the world including David Miller, Jos Buttler, Sam Curran and Rassie van der Dussen, raising the stakes for a million rand catch in the opener.
In addition, if the spectator who makes a clean one-handed catch is a Betway client prior to the match, their prize money will be doubled.
The catch must be clean and not have touched anything more than the palm of the spectator (person who catches the ball). This means that the ball cannot come off a hat, umbrella, another hand, shoulder chest, or juggled either between hands or on one hand.
Competition rules and terms & conditions are available on www.betway.co.za/latestpromos and www.sa20.co.za website
Due to responsible betting guidelines, no-one under the age of 18 is eligible to win. T’s and Cs apply.
Betway is licensed and regulated by the Western Cape Gambling and Racing Board. No persons under the age of 18 are eligible to win. T’s and Cs apply.

About SA20
SA20 is South Africa’s explosive new T20 cricket league. Dropping 10 January 2023, the League is set to thrill local and international cricket fans and attract new audiences of all ages.
4 weeks, 33 matches, 6 global franchises, 102 world class players (local and global) - SA20 is for cricket diehards, party people, families. For everyone!
SA20 has the backing of some of the most recognised T20 franchises in the world, with several IPL strongholds branching out to establish an even greater international footprint. The franchises are owned by six dynamic entities which have made a minimum 10-year investment which will sustain South African cricket, the players and future cricketers coming through the development pipeline.
The League features six privately-owned teams, who will play each other twice in a round-robin stage (home and away) before the semis and final. In all, 33 matches will be played in some of the greatest locations South Africa has to offer: Durban’s Super Giants (Kingsmead), Joburg Super Kings (Wanderers), MI Cape Town (Newlands), Paarl Royals (Boland Park), Pretoria Capitals (SuperSport Park) and Sunrisers Eastern Cape (St George’s Park).
The six teams finalised their 17-member squads during the R125 million player auction. Each team is allowed to field up to four international players in a match, giving plenty of opportunities for homegrown Proteas stars and young local talent to shine while playing alongside the best in the world.
SA20 is destined to become the best League in the world outside of India, and to be South Africa’s No 1 Sport and Entertainment brand. Fans can expect thrilling cricket underpinned by an immersive, inclusive, and unmissable social experience.